Asbestos is a substance that consists of types of naturally occurring minerals. Due to its highly potent resistance to fire, it made for effective insulation that was used frequently in various types of Australian building materials from the 1940s to the late 1980s, such as:

What are the different types of asbestos?

Because asbestos is a term that defines multiple types of minerals, there are many kinds of asbestos that one can find. Typically, you’ll find multiple forms of asbestos in various parts of your workplace building.

These types of asbestos differ in colour, texture and appearance. However, they share a lot of the same properties (including the same adverse health effects).

While there are several types of minerals that contain asbestos fibres such as; winchite, richerite, erionite and taconite, the more commonly recognised forms of asbestos are the following;

The most commonly used form of asbestos was chrysotile (white asbestos). In homes and businesses, you can typically find it in the roofs, ceilings, walls, and floors. Chrysotile asbestos was also used in automobile brake linings, gaskets, boiler seals, and insulation for pipes, ducts and appliances before the asbestos ban in December of 2003 stopped its use.

In Australia, alternative types of construction materials to chrysotile have been in place since prior to 1999. This use includes in major industries covering the building and construction, automotive, and railways sectors.

Amosite (brown asbestos) was one of the most frequently used types of asbestos in cement sheets and pipe insulation. It can also be found in insulating boards, ceiling tiles and thermal insulation products. Like chrysotile, amosite fibres made effective fillers for other materials.

This way, the fibres can be bound in and the finished product can benefit from the amosite qualities. This was common practice for a lot of asbestos-cement products in construction. Other amosite asbestos containing products included:

Crocidolite (blue asbestos) was commonly used to insulate steam engines. It was also used in some spray-on coatings, pipe insulation, plastics and cement products. It is considered the most dangerous type of asbestos, as its straight needle-like fibres (unlike the curly ended fibres of chrysotile) make it easier to inhale.

While the mineral was the third most used asbestos type in Australia, crocidolite is responsible for more asbestos exposure-related deaths than any other type. It was withdrawn from use much earlier than other types of asbestos.

Anthophyllite was used in limited quantities for insulation products and construction materials. However, anthophyllite was mostly not mined with the intention of being used for manufacturing, instead being accidentally discovered in other materials.

It mainly occurs as a contaminant in chrysotile asbestos, vermiculite and talc (which is used in products such as chalk, crayon, paint, rubber, cosmetics and ceramics). It may have a grey, dull green or white colour. Asbestos contaminated talc has recently been identified within crayon and cosmetic production.

Tremolite and Actinolite were types of asbestos that were never used commercially. Instead of appearing in construction materials and whatnot, these types of asbestos were discovered as contaminants in chrysotile asbestos, vermiculite and talc.

Both of these types of asbestos share many similar characteristics, such as the shape of their fibres, as well as their brown, white, green, grey or transparent hues. The difference between these two forms of asbestos comes down to their chemical composition. Tremolite has a greater presence of magnesium over iron, whereas Actinolite has a greater presence of iron over magnesium.

Depending on your NATA or IANZ accredited laboratory you use you will receive results that fall into the Unknown Mineral Fibres or UMF category. Where Unknown Mineral Fibres (UMF) is reported, it is important that confirmation of the fibres’ identity is sought by another independent analytical technique. Where confirmation is not attained, the material should be treated as asbestos-containing.

What are the two mineral families of asbestos?

Asbestos can also be categorised into two sections depending on the structure of their fibres:

Chrysotile fits into the serpentine category due to its curly makeup. However, the remaining five types of asbestos (tremolite, amosite, crocidolite, actinolite, and anthophyllite) fall into the amphibole category.

The term ‘amphibole’ is used to describe the makeup of these asbestos fibres, which is thin, short, stiff, and needle-like. This means that amphibole asbestos is easier to inhale than serpentine asbestos. As a result, it takes less exposure to amphibole types of asbestos to cause cancer, especially compared to serpentine asbestos. This is due to the different structure of the fibres that are easier to become airborne.

What are the two asbestos material groups?

Another, more practical way to classify asbestos is by its material group. This is because a material group classification helps determine how best to approach isolation and containment for materials that are suspected to contain asbestos.

Is all asbestos dangerous?

Asbestos only poses a risk to health when asbestos fibres are breathed in. The presence of asbestos in building materials generally does not pose a health risk unless the material is broken, deteriorating or disturbed in such a way that airborne asbestos fibres are produced. There is the potential for this to occur when asbestos-containing material is being broken, or when it is being drilled, sanded or cut with a power tool.

It is important that only qualified professionals handle materials that could potentially contain asbestos, as well as that they adhere to the asbestos management precautions outlined in your workplace.

These precautions are designed to reduce the risk to employees as much as possible. It is difficult to tell whether a building material contains asbestos, and the only way to be certain is to have a sample of the material tested by an accredited laboratory. If the material is not tested, it should be treated as though it contains asbestos.

Why is asbestos dangerous?

When workers handle asbestos-containing materials in an unsafe manner, fibres can be released into the air. These fibres can be:

When inhaled, these fibres become trapped deep in your lungs, which causes extensive damage over long periods of time. This damage is in the form of debilitating respiratory diseases.

What health conditions can exposure to asbestos cause?

Because of how frequently asbestos was used in construction for decades, there were many instances of workers using unsafe practices and frequently encountered asbestos fibre levels well above background levels. Some may have also carried asbestos fibres home on their clothing, skin and hair, and exposed family members to the fibres. Examples such as this emphasise how hazardous asbestos can be when not approached properly, which is why it is important to adhere to stringent protocol when managing asbestos.

Asbestos exposure has been linked to a range of diseases including:

How can I make the process of asbestos management as efficient and effective as possible?

A software solution such as Octfolio is a valuable asset for asbestos management because it simplifies such a complex process. In Octfolio, you will find every function required to successfully handle all aspects of asbestos management, such as;

Octfolio gives you full control over the asbestos management of your business. Get started with Octfolio by booking a meeting or starting a free trial. 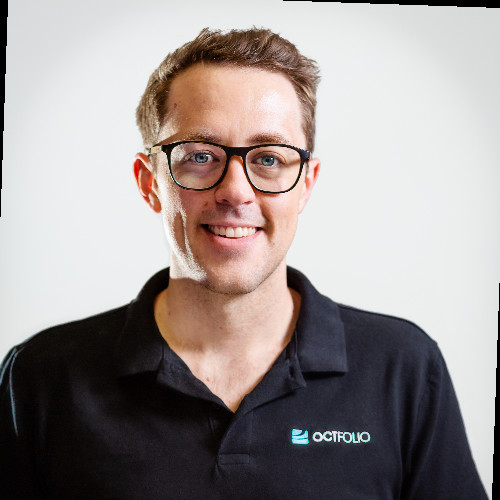 Seb has a long history of delivering elegant solutions to complex business problems that conform to the most exacting compliance standards. He prides himself on his ability to connect with customers and humanise software solutions to be understandable and useful to all parties. He’s also enjoys playing story-based single player games and spending time with his young family, building LEGO, attending recitals, and experiencing new restaurants with his wife.